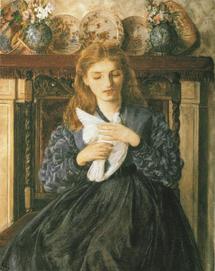 R. Solomon Wounded Dove (1866)
*The following essay updates and is adapted from the author’s longer essay “Rebecca Solomon, Pre-Raphaelite Sister” published in The Review of the Pre-Raphaelite Society 12:2 (Summer 2004): 23-36.

Like many women artists, Rebecca Solomon has been overshadowed in art history by the male artists who surrounded her.  In her case, what is more tragic is that no photograph exists that could show us what she even looked like.  Despite living in the shadows of her artist brothers Abraham and Simeon, her relationship with each, especially Simeon, was strong.  She shared studios with them at different points in her career, and she socialized in their circles of artist friends.  She exhibited almost annually at the Royal Academy for 17 years, and participated in other exhibitions such as the British Institution and the Dudley Gallery.  She was so well known among her contemporary female artists that she joined 37 of them, including Barbara Leigh Bodichon and Henrietta Ward, in a petition to have the Royal Academy open classes to women.  Despite what amounted to a potentially lucrative artistic career, however, Rebecca has been largely forgotten and has had little written about her and her work, even though at the time her pictures were often reviewed favorably.  Behind the Curtain (1858, Private Collection) was cited by a critic in Bentley’s Miscellany as “a first rate work.”  On Peg Woffington’s Visit to Triplet (1860, Private Collection), considered her greatest success, the Art Journal wrote, “This is really a picture of great power … gratifying, encouraging, and full of hope….  [Solomon] adds another name to the many who receive honour as great women of the age”.

Rebecca Solomon was born on 26 September 1832, the youngest of the three daughters born into the artistically-inclined middle-class Jewish family.  Her mother Catherine Levy Solomon was an amateur artist of miniatures, and her brother Abraham was a painter who became famous for social commentary genre scenes such as Second Class—The Parting (1855) and Waiting for the Verdict (1857).  Rebecca studied under her brother Abraham and attended Spitalfields School of Design.  She shared his studios at 50 Upper Charlotte Street, from at least 1851 to 1856 and at 18 Gower Street from 1857 to 1862, the year of his death. Among her early works were copies after old masters and modern painters such as William Powell Frith, but she established herself in the contemporary world assisting artists such as the Pre-Raphaelite painter John Everett Millais. The best known example of her work is a version of Millais's Christ in the House of his Parents, which sold at auction in 2008 for more than £600,000 and is now in a private collection.

Contrary to what one would expect from a traditional middle-class Jewish family at the time, Rebecca did socialize with her brothers’ non-Jewish friends.  Through at least the mid-1860s, George du Maurier and his wife were regular guests at the Solomons’ conversaziones and Rebecca in turn attended the Mauriers’ dinner parties.  Rebecca also was friends with Agnes “Aggie” MacDonald (later Mrs. Edward Poynter, future President of the Royal Academy).  On at least one occasion Aggie stayed with “Beckie” and her family at 18 John Street, Bedford Row, and on the visit of Aggie's sister Alice Kipling (mother of the novelist Rudyard Kipling), Beckie threw one of her "wildly incongrous" parties.

As Simeon’s immediate elder sibling, Rebecca may have had a hand in influencing his interest in Hebrew and Jewish subject matter, such as his first two Royal Academy offerings “Isaac Offered” (1858) and Moses (1860).  Following the death of Abraham, these two siblings developed a closer relationship both personally and professionally.  Rebecca shared Simeon’s studio at 106 Gower Street from about 1865 to 1867, and then at 12 Fitzroy Street from 1868 into at least the mid 1870s. The opening of the Dudley Gallery in 1865 with Simeon on the Administrative Committee provided Rebecca with another major venue to exhibit her watercolors.  She also assisted him during his travels to Italy by acting as his agent with important patrons such as the Liverpool shipping magnate Frederick Leyland.  Early on, however, Rebecca discovered the importance of exhibiting and marketing her own work, and she apparently did this with zeal.  She participated in exhibitions throughout Britain, including in Birmingham, Glasgow, Liverpool, and Manchester.  As an illustrator, her work appeared in The Churchman’s Family Magazine and London Society, and her paintings also were reproduced in papers such as the Art Journal and the Illustrated London News.

The greatest difficulty the art historian has in analyzing Rebecca’s work is finding many of her pictures.  Very few are in public collections, and rarely do they come up for auction.  As a genre painter, she painted works that often reflected gender and social class differences.  Among these are The Governess (1854, Private Collection), where the sad governess looks longingly at the well-to-do happily married parents of the child she instructs, and A Young Teacher (1861, Private Collection), where a child playfully instructs her mixed-race nanny.  She also painted historical and literary themes, probably because she had aspirations to be recognized as a painter of serious subjects.  The Fugitive Royalists (1862, location unknown), for instance, depicts a scene during the English Civil War where an aristocrat and her son are offered asylum by a Puritan mother and her sick daughter, and The Arrest of the Deserter (1861, Israel Museum) is based on a scene in the 1844 comedy Dominique the Deserter by William H. Murray, where the main character in seventeenth-century clothing is led away in handcuffs by two soldiers while a woman pleads for his innocence.  Simeon’s interactions with the Pre-Raphaelites also proved influential on Rebecca by the mid-1860s.  Her painting Woman on a Balcony (ca. 1865, Private Collection) follows the pattern of the Venetian portrait-style works of Rossetti, Burne-Jones, and others of the same period, with a beautiful woman leaning out on a balcony gazing into the distance.  The Wounded Dove (1866, University of Wales, Aberystwyth) reflects the Japonisme craze of the day, with a young woman, her hair down, caring for an injured dove, surrounded by Chinese ceramics and Japanese fans.

Little of Rebecca’s life after the mid-1860s is known.  It has been said that she may have had a brief liaison with the poet Algernon Charles Swinburne, but this is highly unlikely.  She visited Italy at least twice during the late 1860s.  She continued to exhibit along with her brother, and was included in the 1874 Society of Lady Artists Exhibition.  Her career declined about the same time her brother’s did after he was arrested and charged with attempted sodomy.  However, more recent evidence has surfaced that shows she was painting portraits into the late 1870s, including a posthumous picture of Anthony Rothschild for the Jews’ Free School, and the 1881 census shows her still listed as “artist painter” with a studio at 182 Great Titchfield Street in Marylebone, London.  Supposedly she became an alcoholic like her brother, but this too is unsubstantiated.  She was injured on the 20 November 1886 by a hansom cab that ran her over in the street, and later died of her wounds in hospital.